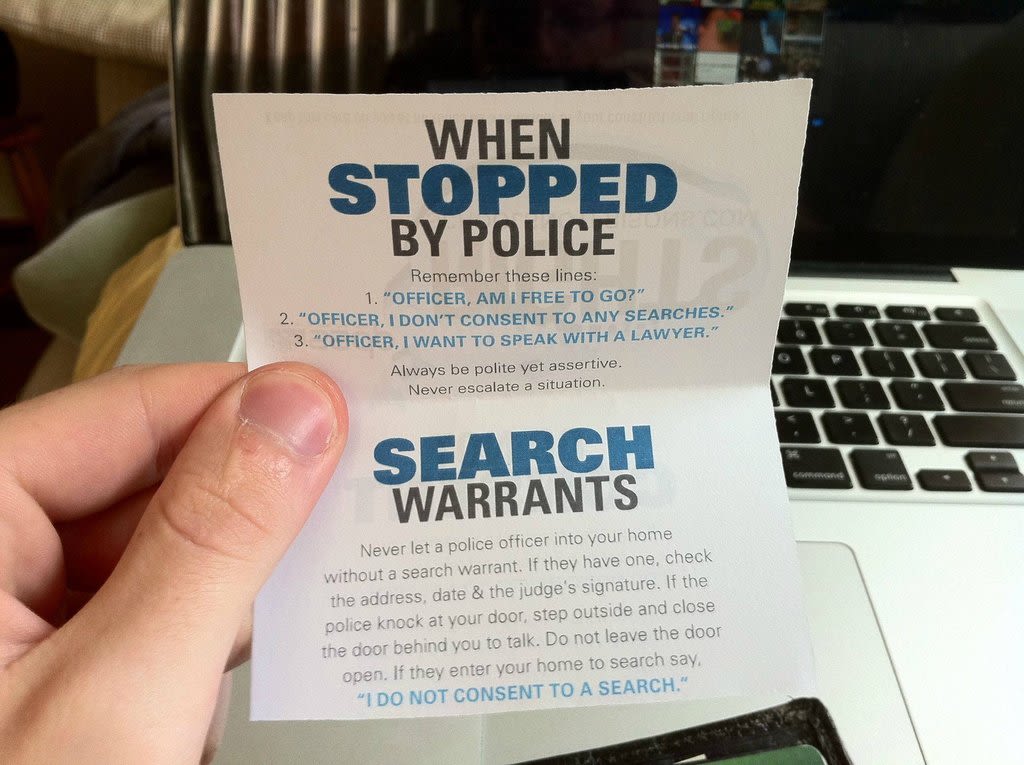 First, let’s talk about searches. The Fourth Amendment was designed to protect the public’s right to privacy and freedom from arbitrary governmental intrusions. Word for word, it reads:

“The right of the people to be secure in their persons, houses, papers, and effects, against unreasonable searches and seizures, shall not be violated, and no Warrants shall issue, but upon probable cause, supported by Oath or affirmation, and particularly describing the place to be searched, and the persons or things to be seized."

In practice, it means the Fourth Amendment permits searches and seizures under two circumstances: (1) If the officer has probable cause to believe that you’ve committed a crime and conducts a search and/or seizure with a warrant, or (2) if the circumstances justify the search and seizure without a warrant first being issued. Then and only then will a search be considered a reasonable.

What Exactly is Probable Cause?

Probable cause means there are facts or evidence known to the officer for him to believe that you’re involved in criminal activity. An officer CANNOT arrest you based only on a hunch or suspicion. Facts or evidence that you have committed a crime include plain view or smell of drugs, admission of guilt, etc. A TRAFFIC VIOLATION ALONE IS NOT CONSIDERED PROBABLE CAUSE TO ARREST.

What Happens If I Am Pulled Over? Can A Police Officer Search My Car?

A police officer generally requires a search warrant to conduct a search. UNLESS he has your consent or an exception to the warrant requirement applies. If the police officer asks if he can search your car, you can refuse by politely saying, “Officer, I do not consent to searches.” If you are not being detained, you have the right to terminate the encounter and can ask if you are free to go. Do not wait for the officer to dismiss you. If you are being detained, exercise your Fifth and Sixth Amendment rights by saying, “Officer, I’d like to remain silent and only speak with an attorney.”

What’s the Difference Between a Traffic Stop and an Investigatory Stop?

Yes. If you are pulled over for a LEGITIMATE traffic stop (i.e. speeding, giving signs of impaired driving, etc.) and there is a drug dog present who then alerts the officer to the presence of narcotics, the officer has probable cause to conduct a search. However, if the officer cannot bring a dog to the scene between the time it takes to write a ticket and issue it, then and only then does the use of the dog become constitutionally suspect.

Stop and Frisks (also known as “Terry stops”) only require reasonable suspicion, not probable cause to arrest. If a police officer has reasonable suspicion based on articulable facts that a crime has been, is being, or is about to be committed, he may briefly detain you to dispel his suspicions. An officer may also conduct a limited pat down of your outer garments to the extent necessary to confirm that you are not carrying a weapon. An officer may seize contraband while searching for weapons, but only if it is immediately apparent that the object inside your clothes is contraband.

Can an Officer Arrest Me Even If I Didn’t Consent to a Search?

An officer cannot conduct a search without your consent, a search warrant, or the application of one of the exceptions to the search warrant requirement. REMEMBER, if you unlock your vehicle or give the officer your keys, you ARE consenting to a search. You DO have the right to remain silent and to politely let the officer know you do not consent to any searches.

What happens when a search violates the Fourth Amendment?

The exclusionary rule applies. The rule states that if a court determines an unreasonable search or seizure was committed then any and all evidence obtained as a result of the search cannot be used as direct evidence against the defendant in court.

Do police have the right to search my vehicle without a warrant?

Yes, if they have probable cause to believe that it contains contraband or evidence of a crime. This is known as the “automobile exception.” This is based on a lower expectation of privacy citizens have in their vehicles, as compared to their homes or persons. They may also search the vehicle under the “inventory exception” if they impound the vehicle after you are arrested. With this exception, they may also open locked containers and compartments inside the vehicle if their departmental policy allows for it.

Do police have the right to search my person without a warrant if I’m arrested?

Yes. This is known as a “search incident to arrest.” If you are lawfully arrested, police may search your person for contraband and weapons.

What happens when I am investigated for DWI?

An officer must have a reason other than a hunch or mere suspicion to pull you over. For instance, an officer may pull you over if you commit a traffic violation while driving, or if you are driving erratically and unsafely. Once you have been pulled over, to continue the DWI investigation the officer must have specific, articulable facts to lead him to believe that you are driving while intoxicated, such as slurred speech, the smell of alcohol coming from your vehicle, or any admissions of drinking by you. Once the officer suspects you of driving while intoxicated, he will likely ask you to exit the vehicle and ask you to perform standard field sobriety tests (SFSTs). If you refuse, he will likely arrest you if he has enough evidence to suggest that you were driving while intoxicated. If you perform the tests and fail, he will also arrest you. After that happens, the officer will read the DIC-24, a standard form that explains that he has the right to request a breath or blood test and that your license will be suspended if you refuse to submit to either test. The officer has the discretion to ask for breath or blood. If you refuse to submit to a blood test, the officer must get a search warrant to take your blood. Once the officer acquires a warrant, he will take you to the hospital for the blood draw. You do not have the right to refuse a blood test once a warrant has been issued, and your blood will be taken from you by force if necessary. After the blood draw, you will be transported to the county or city jail.

By Using An NSL, an Agency Has No Responsibility to First Obtain a Warrant or Court Order before Conducting Its Search of Records. . "Fourth Amendment." LII / Legal Information Institute. N.p., n.d. Web. 20 Sept. 2016.